From the earliest times, charcoal was used to obtain the high temperatures necessary for smelting. Charcoal production became a major industry in this area in the middle ages, as the monks of Furness Abbey built foundries to exploit the iron and other ores found locally. It was also used in the production of gunpowder, used in quantity by the mining and quarrying businesses. 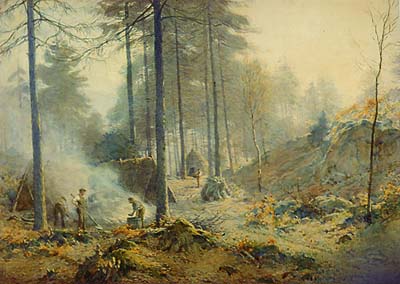 This picture, from a painting by Alfred Heaton Cooper in about 1904, shows a charcoal burn near Bouth, in the Rusland area.

Charcoal burners were a picturesque and skilled breed of people, who lived in the woods in rough huts as they tended their burns, which lasted for several days and needed constant attention to avoid flare-ups. In the woods around Ambleside and the rest of south Lakeland are the traces of dozens of pitstead sites, and this industry was at one time so productive that palls of smoke from the burns would hang over the valleys.