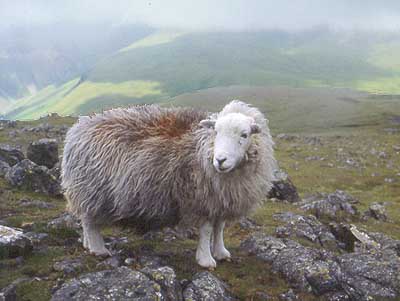 Herdwicks are a hardy breed of sheep, said by some to have come from stock brought to Britain by Vikings. They are the traditional sheep of this area and have been championed as a breed by Beatrix Potter among many others.

It is thought that 99% of the population of Herdwicks are in the Lake District, where they have developed and been bred to particular areas of fell, as they possess the valuable attribute of a ‘home’ instinct. This means they do not wander from the territory, or heaf, in which they were born, so they can be kept as a flock without the need for expensive fencing in difficult terrain. They are thus known as heafed or hefted sheep.

Much argument takes place about the merits of the breed for wool and meat, but the main value is as breeding stock. The meat is very good but the animals are small. The wool is coarse and valued by carpet makers, being less useful for clothing manufacture.