No school existed in Ambleside prior to 1723. In that year a wealthy young man named John Kelsick died. His fortune had been inherited from his father George who had shipping interests at the port of Whitehaven, at that time one of England’s largest. John Kelsick owned property in Ambleside, including this house in what is now Church Street, shown in an engraving by William Green in 1808: 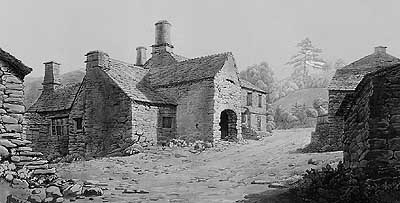 Parts of the house still exist, though it is barely recognisable. It is divided now into shops and a café, but the original round chimney stacks are still in place. Above the house the picture shows the Royal Oak public house.

In his will John Kelsick left money and property in trust, the income from which was to be used to found a school in Ambleside and pay for its upkeep and staffing. In the manner of the time, this school was to be for boys only. It eventually became known as the Kelsick Grammar School, became part of the state system and was in use until the 1960’s when it’s function was assumed by the new Lakes School. The Kelsick Educational Foundation still exists and has been carefully administered over the centuries, continuing to assist young Ambleside boys and girls educationally, providing some ‘extras’ not available in the state school system and in higher education expenses.

Though unknown elsewhere, locally John Kelsick is probably Ambleside’s most famous name from the past. His remains lie in the old churchyard of St. Anne’s.