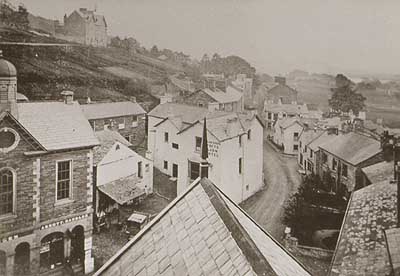 By the 1830s Ambleside’s tourist trade was well established. However, the opening of the railway to Windermere in 1847 had a huge impact on tourism, which had previously been confined to a wealthy elite. The railway raised it from a relatively minor factor in the local economy by making the district accessible to the less prosperous middle class.

To accommodate these new visitors, development accelerated, with new lodging-houses springing up along Lake Road and Compston Road.

In 1854, the new parish Church, St Mary’s was completed to replace the old St. Anne’s, which the community had outgrown and which became a meeting hall until it was sold by the Church for residential development in the 1970’s. The new church was unusual for Westmorland, where the churches seldom have spires and never on such a grand scale as Sir Gilbert Scott thought appropriate for Ambleside.

By 1880 the tourist trade in Ambleside had grown sufficiently to require the proprietor of the Queens and the Salutation Hotels to run six coaches and stable eighty horses at peak periods, all of which provided work for ancillary trades such as grooms, feed merchants, blacksmiths and coachmen.