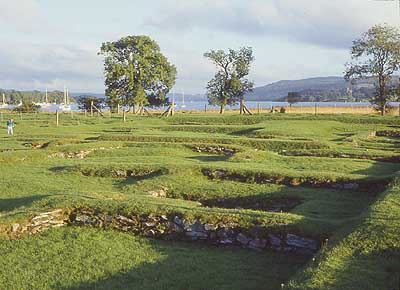 Excavations at Galava Roman Fort began in 1913, by R.G.Collingwood, after the National Trust had purchased the site to prevent development. There is free public access to the site.

The present remains are of Hadrian’s fort, built on the site of an earlier smaller structure started in 90 AD following Agricola’s conquest of northern Britain. Hadrian’s fort was probably started around 120 AD and was occupied until the Romans abandoned the area, sometime between 300 and 400 AD. During that time it was attacked at least three times, but generally its history was peaceful and the garrison of 500 was on good terms with the local people. Attacks when they came were from raiding Picts and Scots.

The fort occupied an area about 100 by 150 yards and had defensive walls over 12 feet high with battlements. To the north, on the rising ground outside the fort, were the cottages housing the garrison’s families.

When the Romans finally left, the stone from the fort was moved by local people to build in Ambleside.

The Armitt Museum in Ambleside has plenty of information about the fort and artifacts from it.