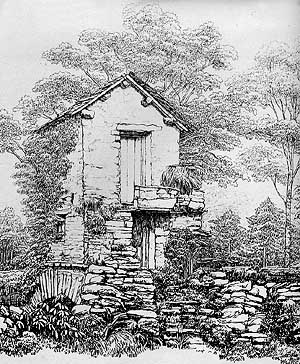 The present North Road used to be main route north from Ambleside, not the present Rydal Road where the Bridge House is situated. Prior to the building of Rydal Road, the land beside Stock Beck was private, a part of the grounds of Ambleside Hall. The Bridge House was built as a folly to embellish the gardens of the Hall in the 16th century, or it was an apple store, or it was . . . and it was built over the river to avoid land taxation . . .

Rumours are rife about its subsequent ownership and usage, one story suggesting that it once housed a family of six (or seven, or eight). It was acquired by the National Trust in the 1920’s and now serves as a Trust information centre.